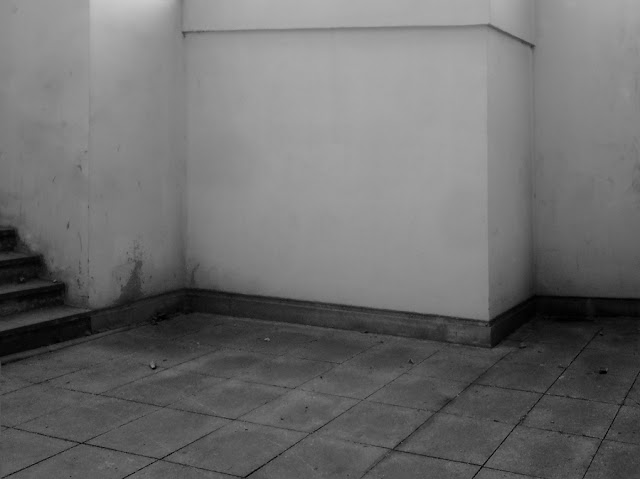 (by Heike Eipeldauer)
Jean-Paul Dumas-Grillet develops his photographs within a dialectic of revelation and concealment. His concentrated, atmospheric pictures of the last years – which are digital photographs produced between 2006 and 2009 – often indicate the view from a window, often denoted as a dark frame or the surround of a crossbar. At the latest since romanticism the window evokes the subjective condition of every observation – we experience the world through images. At the same time hardly any metaphor has shaped the view of images as much as the famous comparison of Leon Battista Albertis between an image and an open window, which allows the view at a world, expanded over the borders of the image. This imagination comes from the transparency of the picture, which requires the overcoming of materiality of the medium.
Like an echo of the actual image borders the window frame doubles the display window of the photo as a gap within the space-continuum. It structures the field of vision, serves as entrance into the picture and implicates the view from the inside to the outside, from a cultural to a natural space – bright snowscapes, sea surfaces, amorphous, hardly fixable natural phenomenons like air, light and water, visually pushing forward, just to bounce back again. Or it is simply concerned the plain fifties front on the opposite of the Munich apartment of the photographer, itself being structured by windows, reflecting our pre-framed view. Through the layering of framings, surrounds and gently nuanced shapes of areas the photographs sometimes achieve a composition which reminds of abstract paintings and makes evident the engagement of Dumas-Grillet with paintings as a dimension of photography. However, within the abstract images now and then signs of human activities become visible – for example we can discover that the window at the opposite front is open.
Jean-Paul Dumas Grillet composes his photographs as interplay between framings and transgression of these frames, as successive shifts of boundaries. The window is not regarded as central subject but as threshold of different spheres, between what is in front and behind, between inside and outside, between seen and unseen, at the same time communicating with the photographic medium as intermediary. Apparently marginal picture details – like stickers – guide the viewer along the pictures surface and fix the paradox of at the same time given but deprived visibility. While the frame creates a rigid geometrical figure, the image plane acts as fragile zone, within which the tension between transparent surface and veil of the medium is newly evoked over and over. The photography itself could be compared to a veil, with its ambivalent structure of veiling and disclosing, presence and absence, of lacking and desire. The artist points out that photography in general is rife with the veil-metaphor: the French word “reveler” (disclose) describes the process when photographic paper is taken out of the developing liquor and becomes a picture; “voiler” (veil) stands for unintentional lighting, hence diffuse fog laying down at the paper etc. When Dumas-Grillet additionally overlays his pictures surfaces with a grey layer, he intends not to disclose the veil of the medium, but in contrast creating the representation with it „La représentation est donc un voile, le voile une représentation.“
Articles plus récents Articles plus anciens Accueil
Inscription à : Articles (Atom)